The Apple Store in Bethesda, Md. 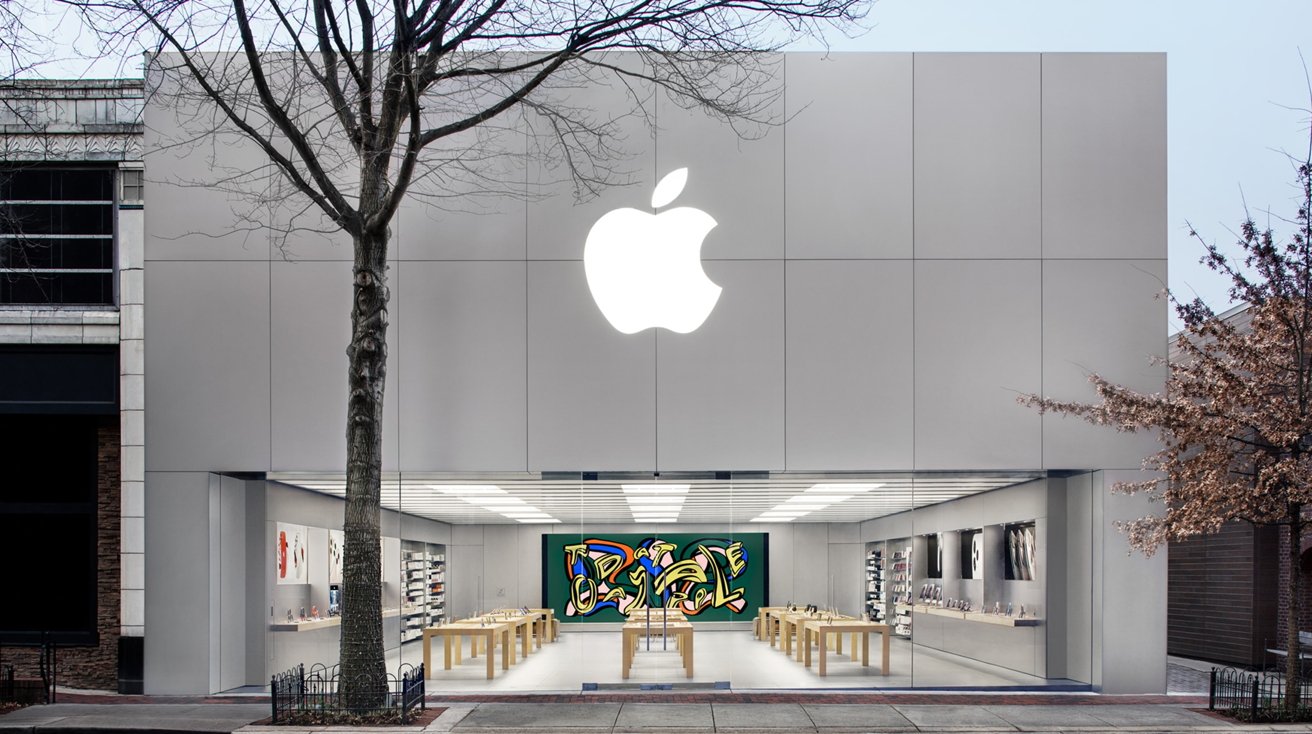 
In the latest Apple Crime Blotter, a UPS driver was arrested for stealing iPhone packages, police sued over Find My iPhone raid, and thieves arrested after leaving behind a stolen iPad.

The latest in an occasional AppleInsider series, looking at the world of Apple-related crime.

Two arrested for robbery of Apple Store with semiautomatic handgun

Two people were arrested in late November for an October theft from the Apple Store on Bethesda Row in Maryland. According to Montgomery County Media, the male half of the duo arrived in a gold Cadillac, pulled a semiautomatic handgun, and demanded specific merchandise.

The male accomplice fled with the items in the Cadillac and was arrested the next month when police spotted that very distinctive car. Both were charged with armed robbery.

A Texas man who works as a UPS driver has been arrested on charges that he took packages belonging to other people that contained iPhones.

ABC 13 reports the driver was actually pulled over for speeding and expired plates, after which police found both an unlawful handgun and marijuana. A subsequent search uncovered the iPhones. The man was wearing his UPS uniform in his mugshot.

A 77-year-old woman from Colorado has filed a lawsuit against a Denver police detective over a January SWAT raid on her home, which the suit says was based on a false Find My iPhone ping.

According to NBC News, the grandmother’s home was raided based on a warrant police had obtained. The police were looking for a cache of items that had been stolen from a hotel the day before, containing several guns, $4,000 in cash, and an iPhone 11.

Police, per the suit, were following a Find My iPhone ping from the owner of the truck from which the items were stolen, which led them to the wrong place, the woman’s house. The suit also alleges that the feature “is not intended as a law enforcement tool,” although it has been used to solve crimes numerous times over the years.

Another Apple Store theft in the U.K.

A “gang” of five male suspects entered an Apple Store at Lakeside Shopping Centre in the U.K., assaulted a security guard, and stole 15,000 pounds ($18,200) worth of iPhones.

According to Yellowed, the thefts took place in the middle of the day, at 12:20 pm. on November 28.

A man in the U.K. was caught attempting to steal two iPhones while leaving a store in Yorkshire, but had to hand them back when he couldn’t get out the store’s front door. The The Daily Mail writes the store owner took pity on the man, amid the cost-of-living crisis.

“As much as we do not condone theft, we would like to reach out to this particular individual,” the store said in a social media post. “Times are difficult for many of us at the moment, so if you are struggling to put food on the table, please visit us in the store to see how we can help.”

Two men in the San Antonio area who are suspected of breaking into more than 20 cars were arrested after they left an iPad in a truck that had been stolen, one of two trucks that had been taken in a single day.

According to the Express News, police said the iPad led them to the suspects and the arrest. “I like dumb criminals,” Castroville Police Chief James Kohler told the newspaper.

While a 77-year-old Texas woman was visiting her mother’s grave, thieves took her purse from her car, which had her iPhone in it. KHOU reports the thieves also made off with the woman’s glasses and hearing aid, as well as cash.

They used the cash on a spending spree at Walgreens, Home Depot, and several gas stations. Cemetery workers told the station that that sort of theft “happens often, especially during the holidays.”

A Wisconsin man has been sentenced to six years in federal prison after he was convicted of receiving child pornography. According to the U.S. Attorney for the Western District of Wisconsin, police in early 2021 received a report that the man had engaged in “inappropriate communication” with a 12-year-old girl.

A search of the man’s car later found an iPhone with evidence, including the contact name of a different underage girl, as well as evidence that he had asked for and received explicit images. The man pled guilty in August.

Woman arrested for using Facebook Marketplace to carry out thefts

A woman in the Cincinnati area was arrested for a pair of incidents, in which police say she made arrangements on Facebook Marketplace to buy or sell items and stole them instead.

Local 12 tells the woman arranged to meet someone on November 1 to buy an iPhone, but during the meeting, she stole it and ran off instead. Ten days later, per the report, she made arrangements to sell a car on the same platform, but at the meeting, she pulled a gun, stole the $15,000 in cash, and sped off.

The woman, who has since been arrested, also faces charges that she stole a rental car from Enterprise in June.

A woman in New York City was robbed at knifepoint in a Manhattan subway station in November. According to The New York Post the robber, a man who walked with a cane, flashed a knife and demanded the woman’s phone.

The phone was an iPhone 13 and the theft took place at the subway station at 7th Avenue and West 53rd Street.