Microsoft brings helicopters, gliders and the Spruce Goose to its Flight Simulator • TechCrunch

Microsoft is celebrating the 40th anniversary of the venerable Flight Simulator series today with the launch of the aptly named Microsoft Flight Simulator 40th Anniversary update. As the company had teased before, this update to the sim will introduce helicopters and gliders, as well as a few classic aircraft. Gliders and helicopters aren’t new to Flight Simulator, but when Microsoft and Asobo resurrected the sim back in 2020, they were still missing from the game.

In total, the update includes 12 new planes (two helicopters, two gliders and eight fixed-wing aircraft). The highlights here are what Microsoft and Asobo call their first “true-to-life” airliner in the base game — an Airbus 310-300 — and the Spruce Goose, the largest seaplane and wooden aircraft ever built. Other new aircraft include classics like the 1903 Wright Flyer, the 1915 Curtiss JN-4 Jenny, the 1927 Ryan NYP Spirit of St. Louis, the 1935 Douglas DC-3, the 1937 Grumman G-21 Goose and the 1947 Havilland DHC-2 Beaver. 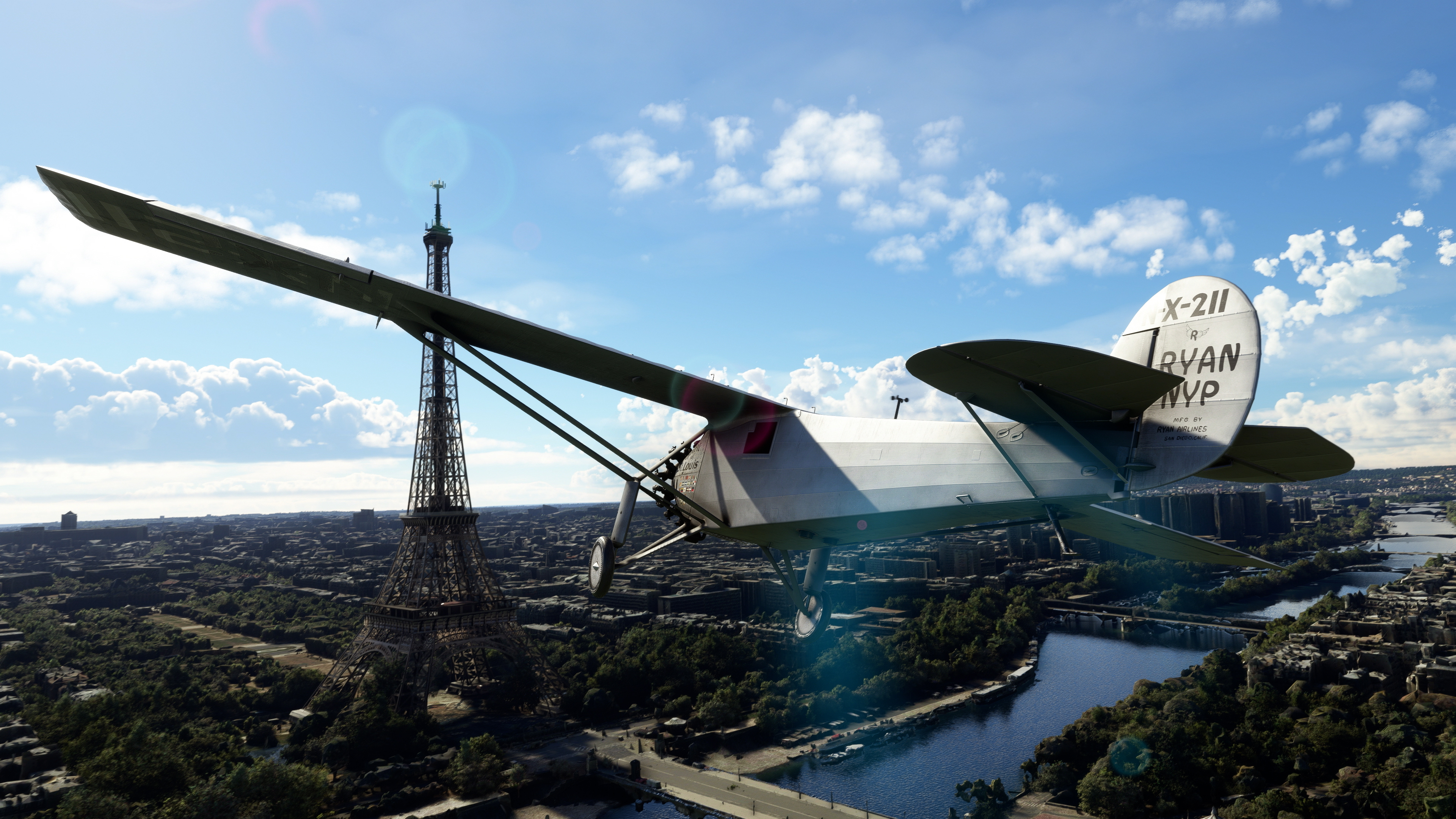 During the event, I got a bit of hands-on time with the new planes. Just like in real life, flying helicopters is going to be hard — hard enough that Microsoft added quite a few new assistance settings that simplify the experience. Without those — and especially if you are playing on a gamepad, for example — you will crash. Repeatedly. Once you get the hang of it, flying those helicopters (a large Bell and the small two-seat Guimbal Cabri G2 trainer) is good fun, though, and allows you to fly slow and low across Microsoft’s impressive virtual model of the earth. 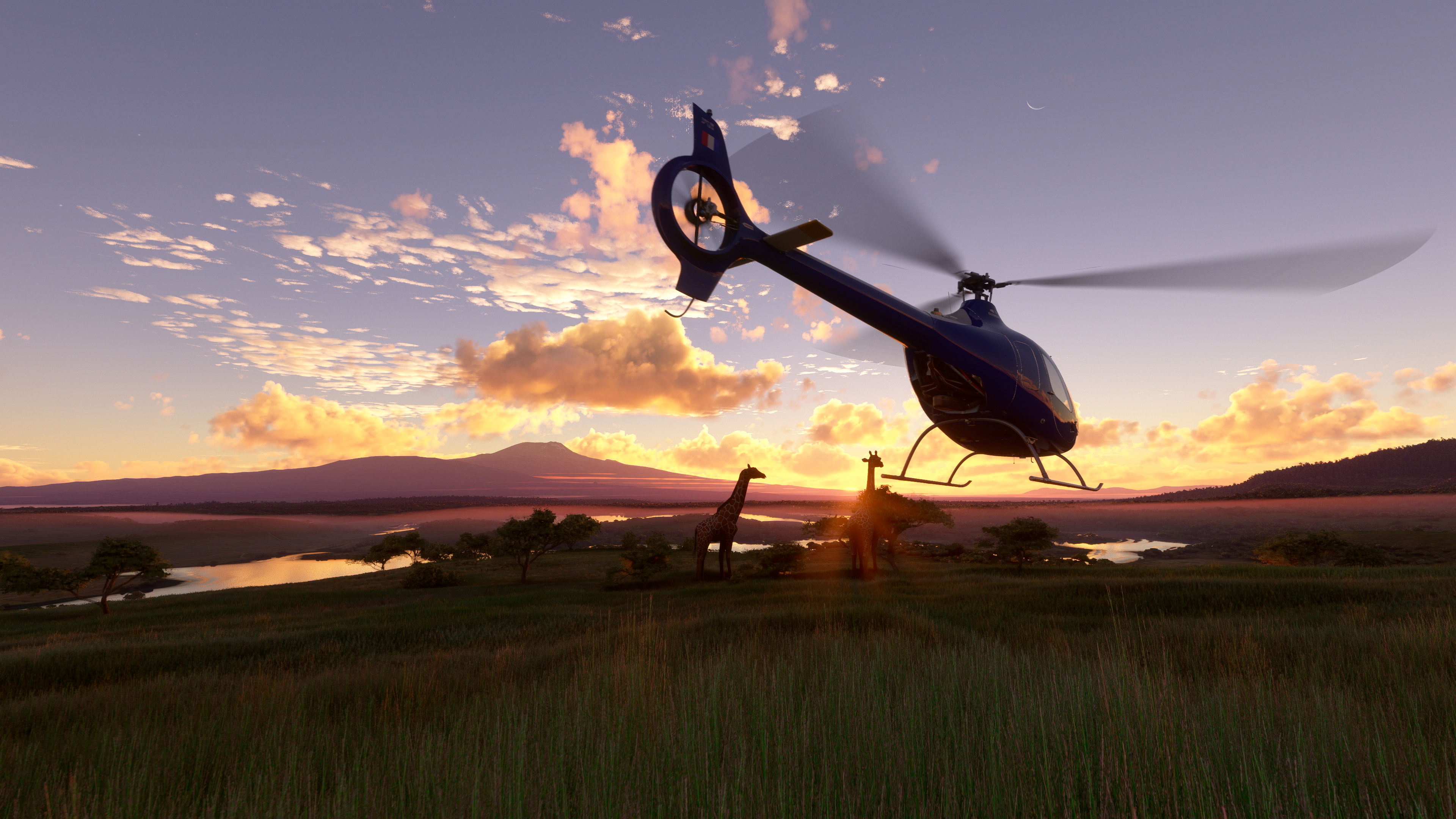 To enable helicopters and their ability to beat air into submission, the Asobo team had to build a new physics engine in the sim, and while the fluid dynamics simulation for modeling planes in the game runs 100 times per second, for example, the rotors of the helicopters are modeled at 1,000 times per second to achieve a higher degree of realism. And to really showcase that, you can now also visualize exactly how the air flows over and around these helicopters (and planes). The team says that this new physics system realistically models ground effect and also allows you to recreate emergencies and set the helicopter down using autorotation when you turn off the engine, for example. 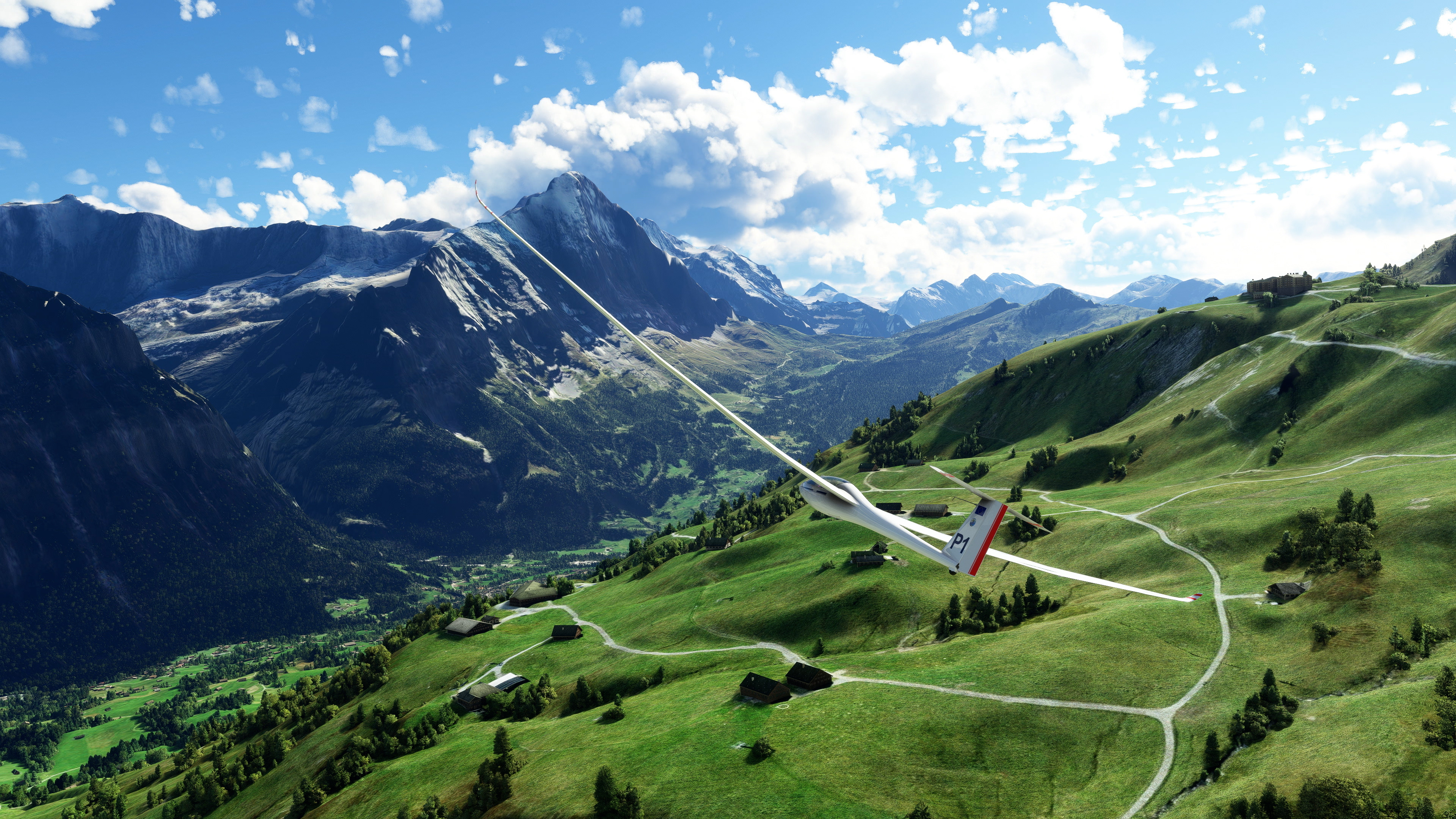 As you would expect, Gliders are a much more docile affair. Here, too, Microsoft added some new visualization to the sim to let you see up- and downdrafts around you. The physics engine for this takes into account everything from the outside temperature, the angle of the sun, the material the sunlight is reflecting from and more — but the Asobo team also admits that it still cheats quite a bit here to do this within the computational limits of the engine. The weather engine doesn’t create clouds from first principle, for example, and so when creating the system for the thermals, the team had to work from where the clouds are and then work backward from there.

“If we want the perfect simulation, then we would need a quantum computer 100 years from now,” Asobo’s Martial Bossard explained. “Sometimes you have to make some clever choices that help us to create the same kind of behavior with a low computational cost.”

Still, as Bossard told me, the idea here was to create an engine that allows real-life glider pilots to find thermals exactly where they would expect them to be.

Otherwise, there are very few surprises here. If you’re looking for a more relaxed flying experience, gliders are definitely the way to go. One nifty feature is that you get the option between winch launches — which are standard in Europe, for example — or using a tow plane, which is the usual way to launch a glider in most of the U.S. And those animations are nice, too, including your friendly launch helper running next to the glider to help keep you steady as you start your takeoff roll. And you can launch a glider from anywhere, too, whether that’s JFK or your local glider field. 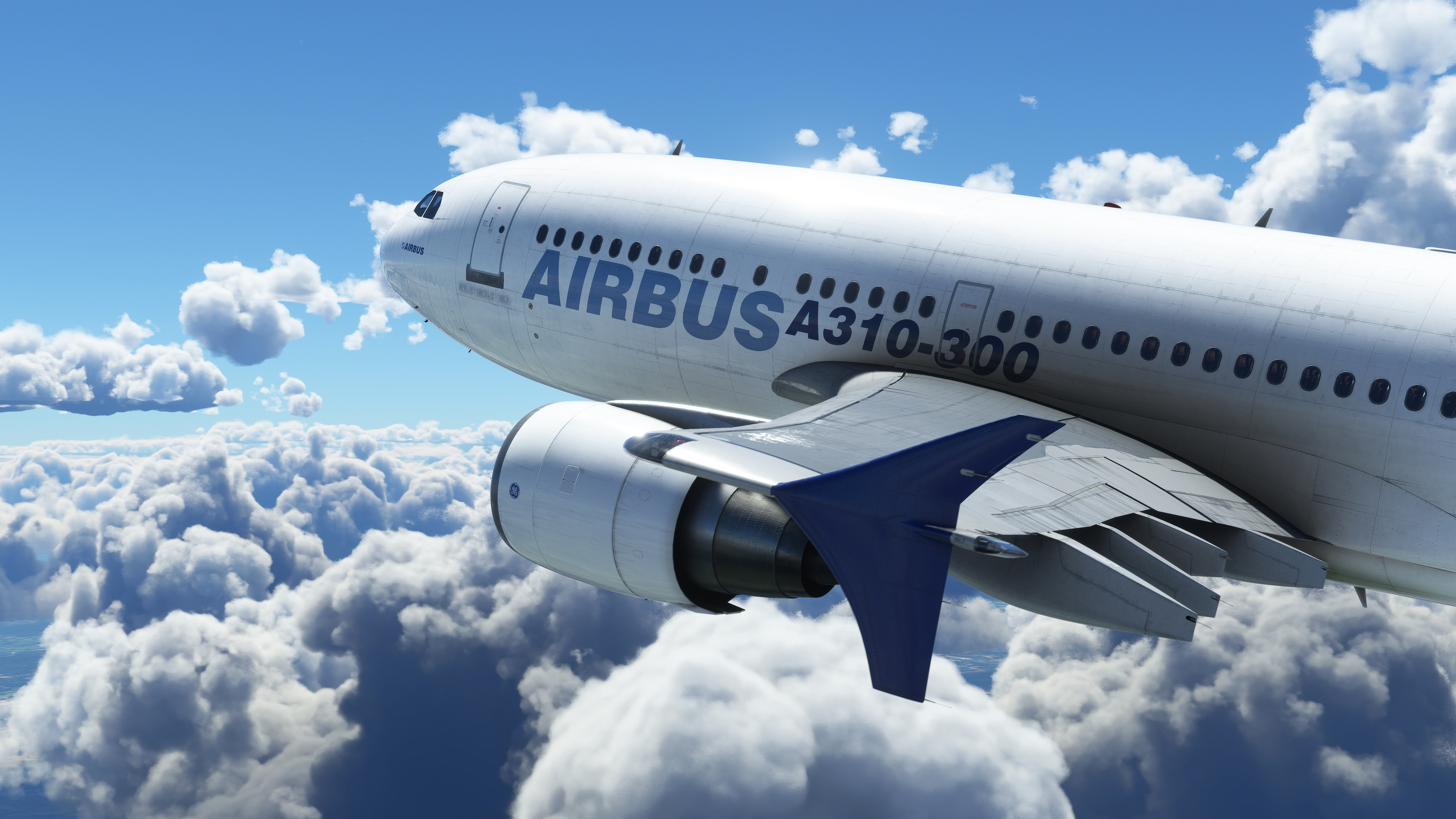 As for the regular planes, I tend to stick to the smaller general aviation planes that are more like what I fly in real life, but the highlight here are the A310-100 and the Spruce Goose, Howard Hughes’ giant flying boat (the H-4 Hercules) that was a bit of a disaster and never flew more than 27 seconds. The A310 is modeled in exquisite detail, with virtually every switch doing what it would do on a real plane, including the flight computer. Typically, a model like this would be a paid third-party DLC, so it’s nice to see something of this quality now becoming part of the base game. 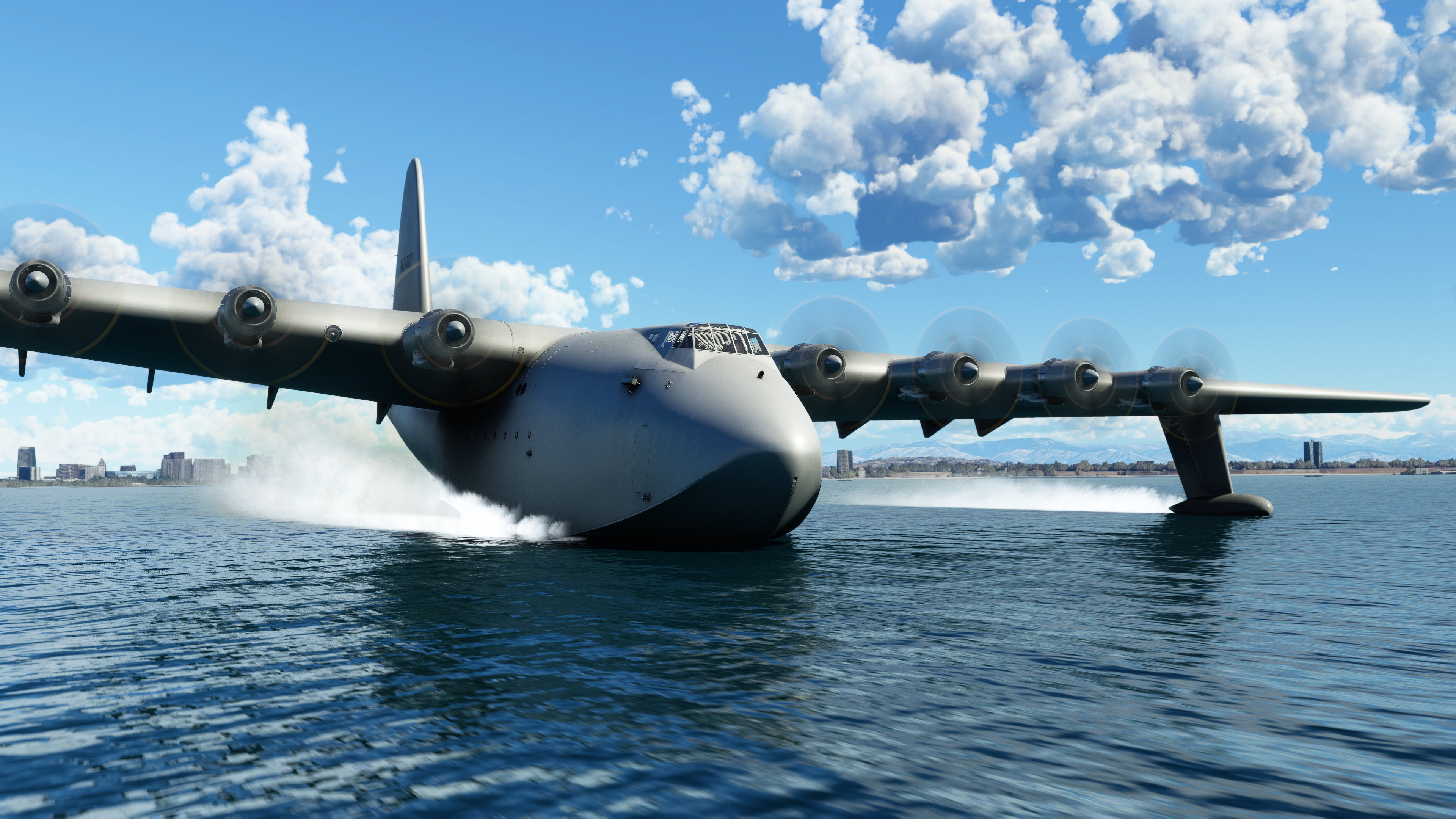 The Spruce Goose feels a bit like a novelty, but it’s also a beautiful model and surprisingly easy to fly. It’s a beast, no doubt, with its massive engines and weight. You’re not going to do steep turns with it anytime soon, but it’s a fun diversion.

And there is more. Microsoft and Asobo also brought back four classic airports, including Chicago’s Meigs Field and added 14 heliports and 15 glider airports. And for those who feel nostalgic, the team also brought back 24 classic missions from previous Flight Simulator versions.

But beyond looking back, Asobo and Microsoft also used this event to look into the future a bit. As Jorg Neumann, the head of Microsoft Flight Simulator at Asobo noted a number of times during the event, the mission here is to build a digital twin of the earth. That includes cities — for which the Flight Simulator team now charters its own planes to get the photogrammetry data — but also smaller features like adding more animals, including birds, and getting better weather data (and maybe historical weather data in the future). 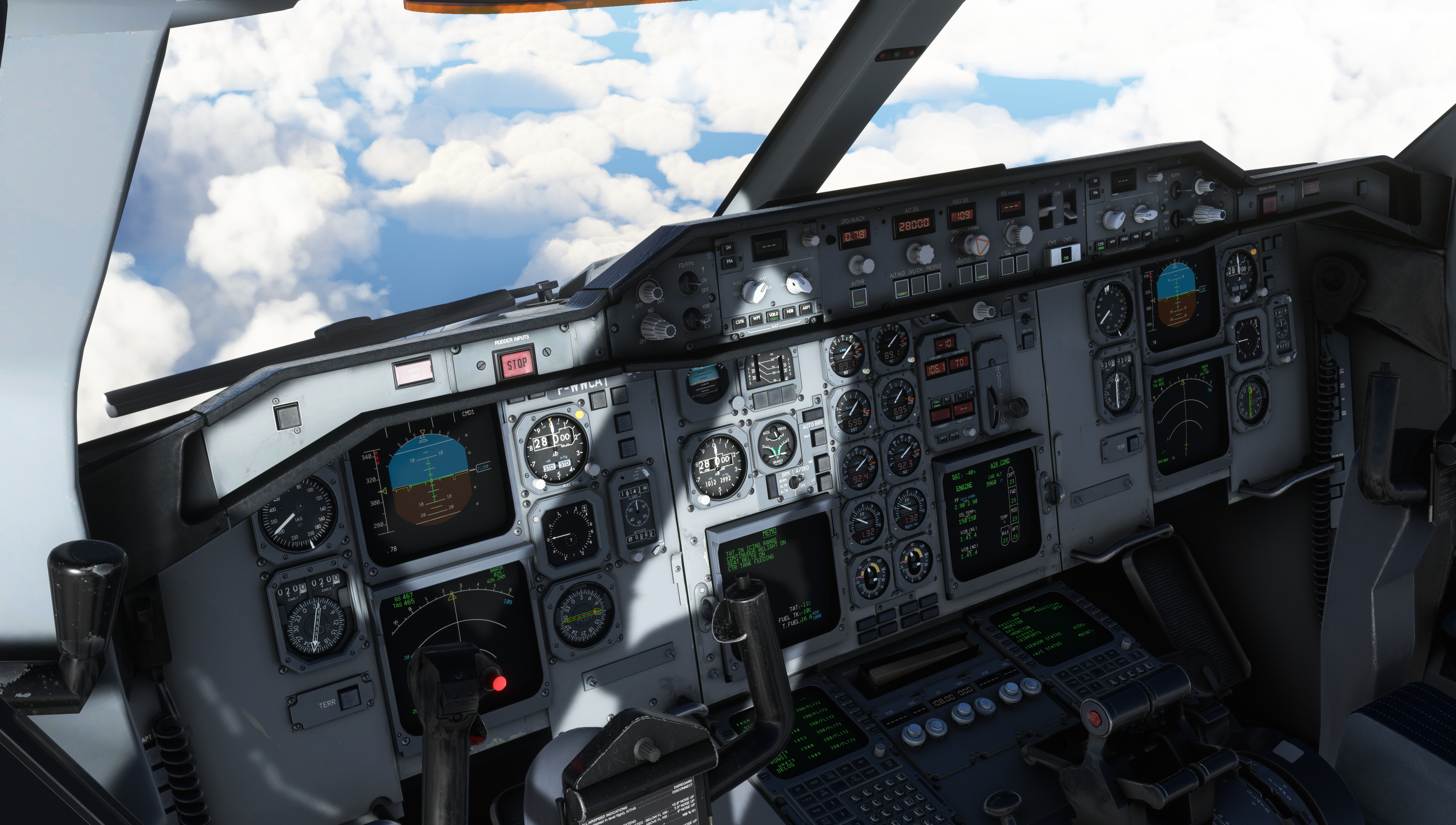 “I‘m trying very hard to get other continents captured because it’s very much United States and you have great data for Europe, pretty good data for Western Europe. And then it gets pretty thin. There’s some stuff in Australia, some stuff and Japan and then I say, ‘hey how about Brazil?’ And everybody looks away,” he told me. “So we are actually now hiring planes and we equip them with cameras and fly ourselves.”

Early on, the team worked with the data from Microsoft’s Bing maps. Now, it’s almost the other way round and the Flight Simulator team provides its data to Bing Maps. And while Microsoft worked with Austrian startup Blackshark.ai to fill in spots where it didn’t have 3D photogrammetry data when it launched the sim, the company has now brought this work in-house, Asobo’s director Bossard told me. “Sometimes, on the ground, the scene looks like a PlayStation 2 game. We would love to be in position to improve that, but it’s a lot of work and a lot of research,” he said.

He also noted that the team is aware that the built-in air traffic control system in Flight Simulator remains rudimentary and often breaks the immersion. The team is working on that, too, and actively looking to hire specialists to improve it.

Neumann said he’s also thinking about digital preservation a lot these days. That may mean building digital models of classic aircraft like the Spruce Goose, but also classic airports and using the satellite imagery and other data the team is capturing and visualizing and preserving. He noted that the current version of New York City in the game is actually a few years old now and that the team has a 2022 version ready to roll out, but that he wants to be able to give players the choice of which one to use. That’s an interesting concept and something we’ll likely hear more about in the coming years.

Mukesh Ambani, one of Asia’s richest men, has made a splash in many industries over ...