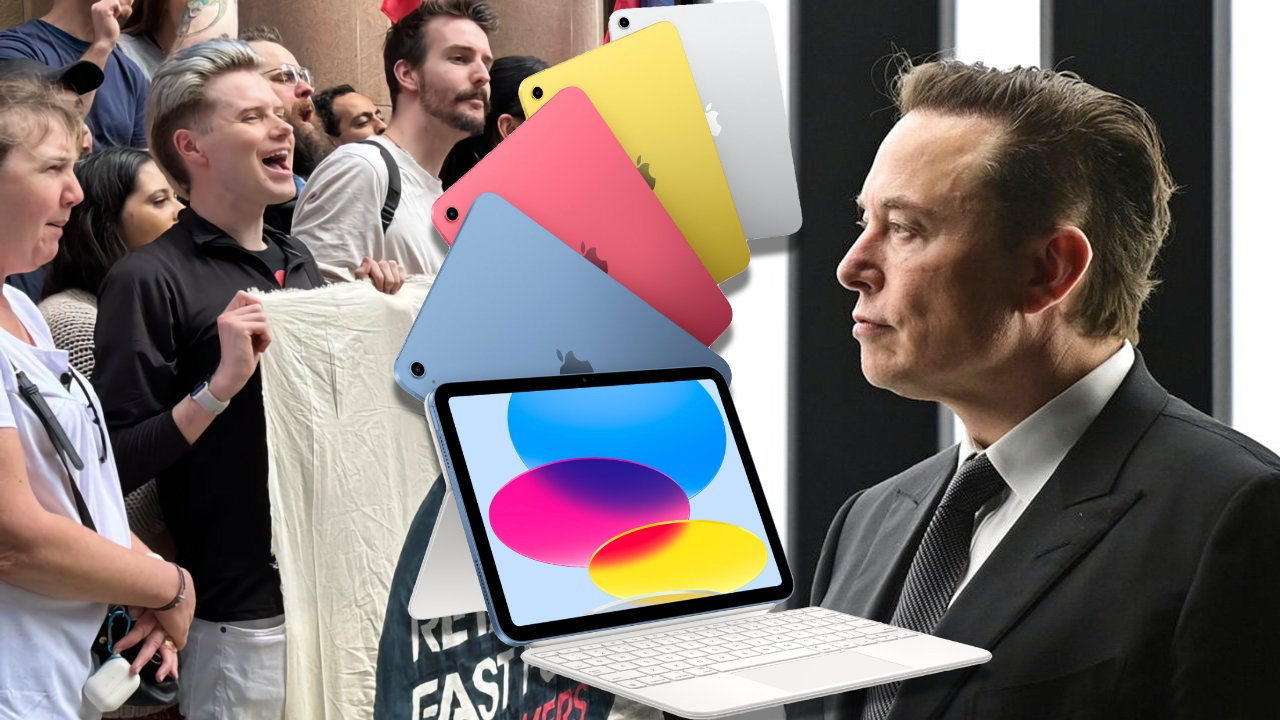 
Apple revamped its iPad lineup, lost one designer and briefly regained a previous one, plus Musk bought Twitter.

Apple couldn’t know that this was going to be a really bad time to launch costly iPads that didn’t have enough to differentiate them from last year’s models. Engineering plans like this might take years and only everyone voting for Brexit should really have seen how delicate the economy is.

Yet Apple did make a nod to the world’s situation by keeping the ninth generation iPad on sale. It’s led to the unusual situation where, comparing performance, features, and especially price, the gem in the iPad lineup is last year’s model.

Apple was luckier in its timing with the Apple TV 4K. While it still doesn’t run on the latest processors, and while it still works exactly as it has for years, this time Apple cut the cost.

True, it did so by removing the Ethernet port, but you didn’t even realize there used to be one.

Maybe the new iPad is perfect for you, in which case you buy it. And if it isn’t, then you don’t. It’s not like we have to buy everything Apple launches.

Except in October 2022, you had no choice but to see what became one of the month’s biggest controversies. Apple launched an expanded advertising service and if that should only have been a big deal for marketing people, it became a problem.

For Apple’s expansion of its ad business at all costs came at one excruciating cost. At one point in October 2022, you could regularly see ads for gambling apps — positioned in the listing for apps that are intended to help gamblers quit.

Apple switched its ad expansion off after complaints, but you know it’s coming back and you know it is only going to grow. Hopefully it’s at least going to be done with more care in future.

Though it wasn’t just Apple trying to expand and get some new revenue. Throughout the month, there was a back and forth as YouTube experimented with trying to get some cash by charging people to watch videos in 4K.

By the end of the month, though, the experiment was officially over and 4K videos remain as free to watch as they always were.

Don’t bet on it staying that way, though, as the experiment cannot have been a technical one, it has to have been a marketing trial. If it can be turned back on with the tap of a button, YouTube finances only have to get so poor before that button will be pressed.

YouTube has the advantage that it makes money off millions of videos uploaded without the creators’ consent, but it also has a disadvantage. There’s not a lot you can add to how YouTube works, and certainly not much that you can convince people to pay for.

So there’s no way to, for instance, design yourself out of problems by finding unique and compelling new answers. That’s always been the Apple way, but then Apple’s design team took a hit this month as it lost Evans Hankey.

She wasn’t as much a household name as Jony Ive, but she did replace him and she has been key to Apple. Not any more, though, and if Apple has a succession plan, it wasn’t revealed in October 2022.

Whoever takes over from Hankey as chief hardware designer, they’re going to have to deal with a significant change to the iPhone. In October 2022, the European Union finally passed a law that will require all smartphones to use a common charger.

Specifically, it’s USB-C, and while there’s a lot to praise about the idea of a common charger, the law launching it is flawed. Still, Apple’s going to have to swap out Lightning for at least Europe, and more likely the world.

It can rest easy about the UK, though, as the country has said it won’t follow the EU in implementing this requirement. Just imagine the relief at Apple Park.

But back to design chiefs

By chance, the exit of one design chief was announced around the same time as the very brief return of another one. Jony Ive was again involved with Apple, or at least Apple TV+.

It’s unlikely that it entailed him popping back in to Apple Park, though. Ive is one of the executive producers on “The Boy, the Mole, the Fox and the Horse.” The animation is due to be screened first on BBC1 in the UK on Christmas Day, then streamed worldwide on Apple TV+.

As Ive was being CCd on emails with Apple TV+, and as Hankey was looking for the door, staff at other firms were having a particularly bad time. Everyone at Twitter spent October wondering whether they would still have a job in November, for instance.

That was because the unimaginable went through hoops in the month, only to land at the end on yes, Elon Musk has bought Twitter. On his first day, he fired most of the company’s executives, then went to town on the staff.

It’s obviously been most scary for Twitter employees, a great many of whom are now going to be spending a lot of time working on lawsuits.

A problem is that if you worked for Twitter, you obviously had a Twitter account and there wasn’t a lot of reason to have anything else. So just as staff there typically discovered they’d been laid off by losing online access, it’s also been hard for friends to stay in contact with them.

Consequently, not to single one employee out, but Nigel, let us know if you’re still there and okay, would you?

There was a worse place to work at than Twitter in October 2022. If you were a worker at Foxconn’s main iPhone plant in Zhengzhou, China, for instance, it’s 50/50 whether you were working — or fleeing.

Somewhere between the two, come Apple Store staff. Obviously the conditions weren’t as bad as they allegedly were in Zhengzhou with COVID lockdowns and a lack of food, but there they were worse than Apple would like you to think.

October saw more anti-union efforts from Apple, which just chiefly underscored why retail staff now need unions. Apple repeatedly says that it is proud of its workers, and does say that it pays more than other firms.

Yet in this month Australia saw what’s claimed to be the first national strike by retail staff in the country’s history — and it was staff at Apple Stores.

If this history strike had been by workers at any other Australian store, no one reading AppleInsider would have even heard about it. This was a genuine case of Apple getting attention it deserves — but as ever, there were examples of it being made a scapegoat.

Such as Mark Zuckerberg blaming Apple for his making an expensive VR headset. Or something like that.

In Zuckerberg’s mind, Apple is aggressively making moves to control the metaverse. Such as entirely failing to release a headset or even admit that one is coming.

If Apple is involved, it’s news

Similarly, the Level Lock+ came out in October and some Apple Stores stocked it. That’s enough to make it news, and preferably bad news, as long as you can make Apple look bad.

In this case, the Apple-is-bad news cycle centered on how a YouTuber revealed that it’s possible to break a Level Lock+ by using exactly the same techniques that will break the regular lock on your front door right now.

If anything, the Level Lock+ is ultimately more secure than regular locks because, yes, it can be broken — but it will send you a notification if someone does it.

That is a very good feature and you’d hardly know about it from the press coverage.

Up in the air

But then there was also Lufthansa, which allegedly made up stuff about Apple. The airline banned AirTags from its flights because they are illegal under International Civilian Aviation Organization guidelines — and they’re not. Not in the slightest, and before the month was out, Lufthansa had backed down.

Just to stress this, not one pixel of Lufthansa’s published argument against AirTags was true. And just to stress it still further, if Apple designed AirTags to have batteries that were illegal on flights, it wouldn’t just be Evans Hankey heading for the door.

Far be it for AppleInsider to question why an airline would not want people to be able to track where their luggage goes. But next time you fly Lufthansa, we’d understand if you only took carry-on.

All of Monday’s best discounts are now kicking off the new work week, and we ...